Two recent examples of posts about Ryanair and Odeon on Facebook highlight the amazing power of social media as well as providing valuable lessons for big brands and small businesses alike. 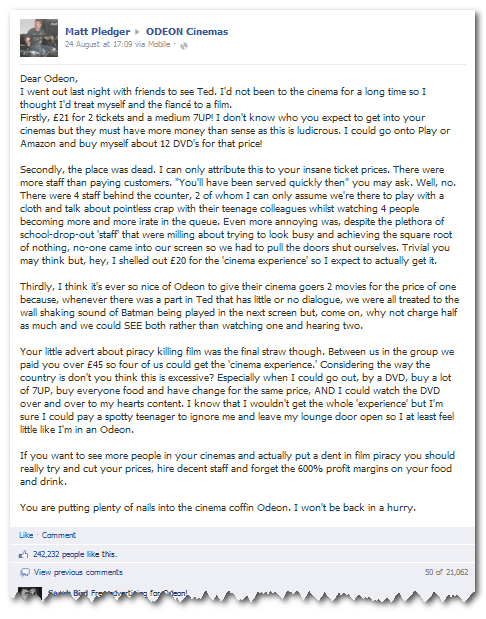 It would be harsh to label either as a ‘social media fails’ but they was certainly room for improvement in how they were handled and there are lessons to be learned. In the case of the post about Ryanair, analysis of the Facebook comments showed that only a quarter of the comments supported Suzy McLeod, the complainant. Furthermore, the post was made on an unofficial page so it’s unfair to expect Ryanair to reply to the complaint on the page.

Despite reports that the Odeon social media team didn’t respond during the Bank Holiday weekend they did in fact reply on Saturday morning after Friday night’s post by Matt Pledger.

Here’s a summary of lessons to be learned from these two episodes:

1) Twitter is generally associated with viral posts that reach huge numbers of people very quickly but these two examples are a reminder that it happens on Facebook too.

2) The conversation can continue. At the time of writing on Tuesday 4 September – a week after the initial post – there were about 25 posts still be made every 5 mins on the Odeon Page.

3) Customers will talk about a business and its products or services on social networks – fact. It makes sense for a business to engage and shape the conversation and to provide an environment for doing this. It’s interesting that Ryanair doesn’t have an official Facebook Page.

4) Whilst the Odeon did respond over a holiday weekend it would have been better if they’d responded the same day. Regular monitoring of social media networks particularly by big brands is important including out of office hours.

5) Issues made in complaints need to be fully addressed. In the Ryanair case a spokesman drew attention to the terms and conditions as you’d expect but the complaint was mainly about the size of fees charged. Similarly, in the Odeon case the real issues were’t addressed as fully as they might have been.

6) If a company has a bad product or service, social media won’t help. In fact, it could hasten the company’s demise or lead to products and services being dropped. Customers now have a huge amount of power thanks to social media.