A great example of traditional media combining with social media to brilliant effect could be seen during the ad breaks in the UK’s X-factor last weekend. Mercedes promoted their new A-Class with a number of TV adverts that were directed by the audience using the #YOUDRIVE Twitter hashtag. 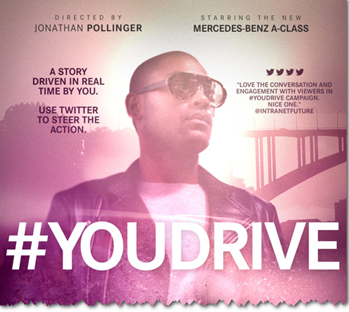 In a story involving a singer, played by Kane Robinson, trying to outfox the police and play at a secret gig, viewers could decide using #YOUDRIVE with other hashtags how each segment of the advert played out. The most popular hashtag choice each time, eg #evade or #hide and #ride or #decoy decided the next part of the story. If that doesn’t make much sense you can see exactly what I mean and direct the action yourself at youtube.com/youdrive.

By using Twitter, advertising agency Holler, who created the advert engaged viewers by giving them control of the story. Engagement was boosted on YouTube with a competition to win an A-class by guessing the date of the competition.

The ads provided great publicity for Mercedes via TV and across Twitter via the hashtags. Further exposure was provided across Twitter and Facebook with viewers of the YouTube encouraged to share the video. At the time of writing, Sunday 14 October, the video had received 3,679,396 views.

Did you see the ads? If not, watch the video and tell me what you think in the comments below.