I’ve flagged up Gü Puds before – read here and here – as being a brand that really knows how to engage their community on Facebook and Twitter. With their latest Valentine’s competition they combine the two social networks with great effect. Followers on Twitter had a chance to win Gü Puds for a year by tweeting “I want to win a year’s supply of @gupuds for two because #ilovegu” plus a photo of Gü.

I want to win a year’s supply of @gupuds for two because #ilovegu saving these for valentines, #takes effort twitter.com/niamhini/statu…

The Twitter hashtag competition was supported on Gü Puds Facebook Page with posts about the competition raising awareness and creating engagement in their own right. 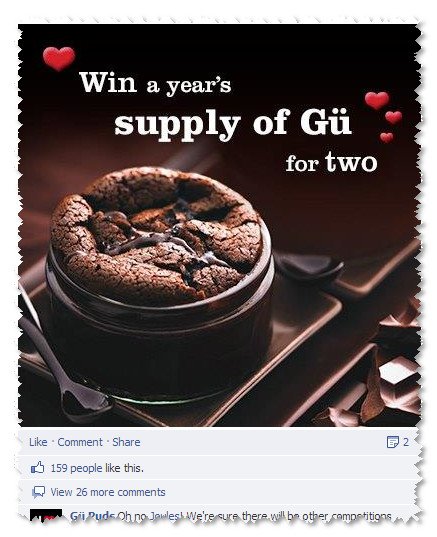 Competitions that link into national events work well and as people’s awareness of Valentine’s Day would already be heightened and with this social media competition there’s a natural link between the event and Gü desserts.

Twitter hashtag competitions or draws are easy to setup and are cheap (or even free) to run. Paid advertising is not required although it could be used to boost awareness of a campaign even further. This competition was an effective way to raise awareness of Gü Puds and it’s a model that could be followed be pretty much any other business.

To learn more about how you can use Twitter to raise awareness of your business check out my regular Twitter training in Cheltenham, including Advanced Twitter for business workshops.