Gü Puds Facebook Page is a great example of how to generate interaction and engagement with lots of great ideas. For example, the recent promotion of their first Chocolate Cookbook in which they encouraged fans to spread the word about their new publication by ‘making a deal’. They stated that in return for up to 200 Shares of the post promoting the Cookbook received, Gü would share one recipe for each 50 shares.

This approach was very successful in encouraging fans to interact when comparison is made with other posts on the Page. For example, an initial post which simply promoted the Cookbook resulted in 98 likes, 14 comments and 1 share. As you can see below this interaction was considerably less than ‘share in return for recipe’ post. 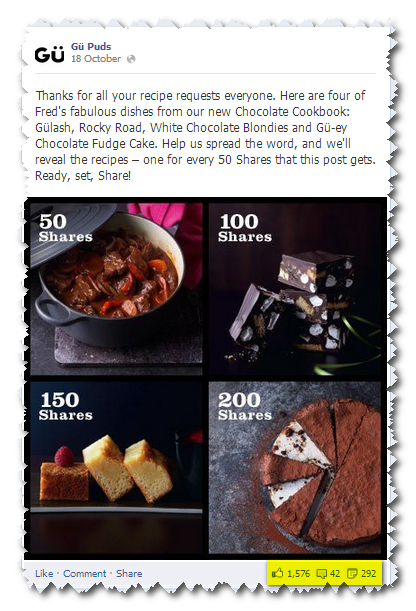 For more on Gü Puds use of Facebook read my article from May on their competition which linked in to the Queen’s Diamond Jubilee.