Great to see Gloucestershire Constabulary using their social networks to appeal for help in finding missing persons. The public really latch onto messages like this and help spread information about the missing person. In the case below the Facebook post has received 207 shares and the tweet 37 retweets. 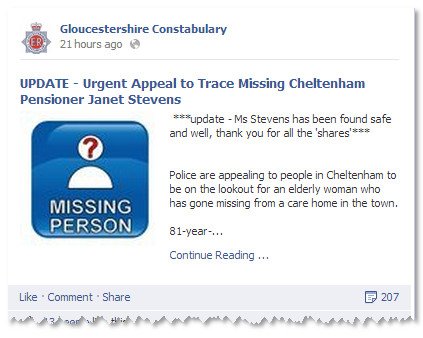 When there is news the Police can use social networks to keep the public updated:

Janet Stevens has been found safe and well in Cheltenham.

In this case, the woman as not found as a direct results of social media but a spokesperson for Gloucestershire Constabulary stated, “..we do feel with appeals for information on any matter that social media is a vital way of doing this and of keeping the public informed.”