Could Facebook be gearing up to take on LinkedIn? Whilst making a change to my Work and Experience section today, I noticed that Facebook have introduced a new sub-section called Professional Skills. 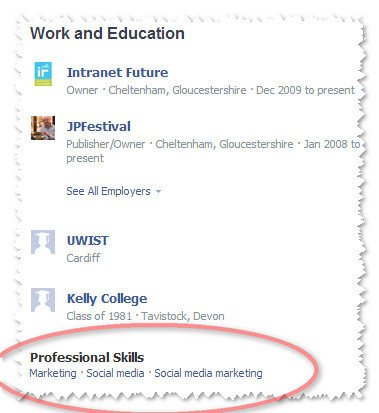 LinkedIn is known as ‘the professional’s network’ so it’s interesting that Facebook have quietly introduced this section named Professional Skills for some users.

As long as your professional skill has a Page then you can add your skill. Most mainstream skills have Community Pages. Simply type in your skill, select and save.

It’s another example of Facebook being ‘inspired’ by features on other social networks. Google+ inspired Facebook to introduce cover photos, Facebook borrowed hashtags from Twitter and now it’s used a similar idea to the Skills and Expertise section on LinkedIn profiles. To be fair, it’s not only Facebook that ‘borrows’ ideas. LinkedIn introduced Likes, Comments and Shares under posts some time after Facebook had them.

But of the Big 3; Facebook, Twitter and LinkedIn, it does seem that Facebook is the one determined to be ‘all things to all men’ with the widest range of features and appearing to many different audiences.  In this instance, it appears that Facebook is positioning itself to appeal to both professionals and the recruitment sector. It’s a small step but does follow on from the launch of Graph Search which is a useful tool for finding new employees and Monday’s announcement of a new Graph Search add-on. Launched by Work4, a social-recruiting company that focuses on Facebook, the tool makes it easier for recruiters to find prospective candidates using Facebook.

If you’re a recruitment professional, do you think these changes will help you in your role?