If you’re an organiser of regular events or a planning a one off conference, show , workshop or meetup the success of  your event is going to mainly going to be decided by the number of people who turn up. 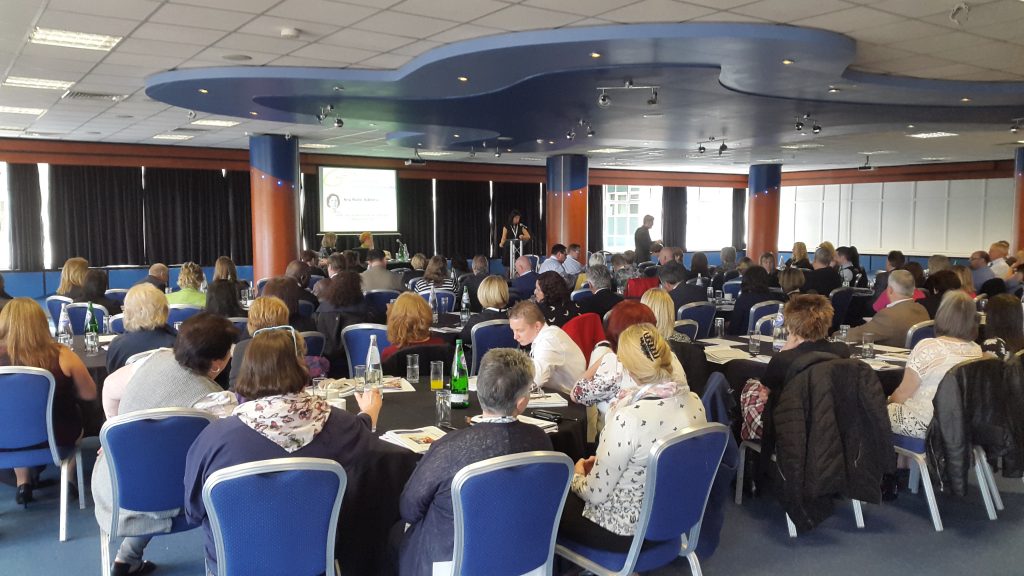 Social media can be hugely powerful channel for promoting your event, whether it’s held online or offline plus it’s a low cost form of marketing too. I would be reluctant to state it’s free because the human element involved to post and tweet comes at a cost of time and effort and budget will be required for the social advertising that I’m recommending below.

With the constant bombardment of buzzing phones, notification pings, posts, updates and tweets it can be difficult to make your event stand out and capture the attention of potential attendees.

The tips below will help you maximise your reach, grab attention and attract more people to your event.

Tip 1) Create an en event hashtag – Creating and getting your event hashtag out there is the single most important thing you can do when using social media to promote an event. The hashtag should be chosen carefully and have the following characteristics. Firstly, it should be unique. You can run a search on Twitter to make sure that it isn’t included in many tweets and preferably known at all. For example, I used to help organise an event called Digitalks so our first thought was to use #DigiTalks. However, Digitalks is the name of a Brazilian digital marketing magazine and the hashtag of the same name is widely used. Although not idea given it’s length, we chose to go with #DigiTalksChelt to reflect the location of the event; Cheltenham. Secondly, it needs to be short and I’d suggest an absolute maximum of 14 characters. For example, the official hashtag of last year’s Rugby World Cup wasn’t #rugbyworldcup but #RWC2015 which brings me onto the third point. Thirdly, if you are in the position or organising a well established global annual event it’s fine to put the date in the hashtag such as #RWC2015 as there will be enough interest and conversation around each annual event. However, for most events it’s preferable not too so that conversation can carry on throughout the year plus it makes the hashtag shorter too. For example, the Academy of Motion Picture Arts & Sciences choose to go with #Oscars; neat, simple and 100% matches the name of the event and awards.

Hashtags are great because they can be used across most social network platforms with the notable exception of LinkedIn, who for reasons unknown dropped hashtags from their platform in August 2013. (Update 6 March 2017: LinkedIn brought hashtags back in early 2017) Hashtags help create a buzz around your event, particularly if they are being used across the majority of social accounts and in particular Twitter and Instagram.

A key aspect of social media is sharing so to make the most of your hashtag encourage your attendees to share alongside your posting and tweeting. A good way of doing this is to flag up the hashtag on their booking confirmation after they’ve reseverd their place . You can use a great tool called ‘clicktotweet‘ to make it easy for them to do this.

Don’t forget to use offline materials too to get people using your hashtag eg signage, brochures, banner, clothing and if you’re really dedicated tattoos! (just kidding). During your event you can use display stands to promote your printed literature and your hashtag.

Tip 2) Set up a Facebook Event – Set up a Facebook Event making sure that you create the Event from your Facebook Page or Facebook Group. The latter are particularly powerful as all the members of your Group will be invited. From your Page you can only invite your Friends which is a bit of a pain. However, Facebook Events so give your event some dedicated promotion and you can link to them from elsewhere eg newsletter, website and other social channels. The make it easy for people to engage with the event as they can state they are ‘Interested’ or ‘Going’ plus write Comments and upload photos on the Wall. If attendees have to book then you can add a button to encourage them to get tickets. 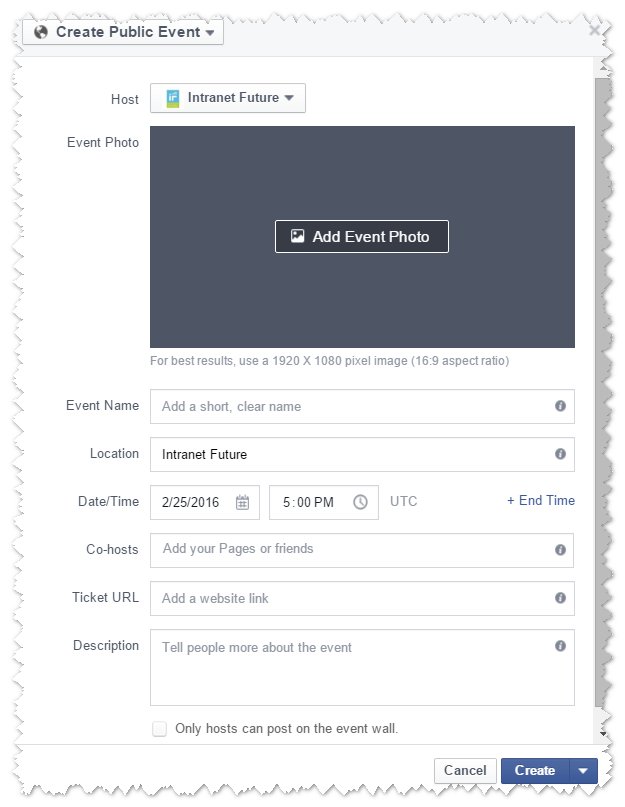 Tip 3) Produce a teaser video – Make a short teaser video around 30 seconds in length stressing to potential attendees why they should attend. To make the message clear you could overlay large text onto the video stressing the benefits of attending. A great advantage of a teaser video is that it can be regularly shared across your social channels as well as being hosted on your Facebook Page, YouTube, Pinterest, your website and in email newsletters. On your Facebook Page make sure that your video is Featured to give it extra prominence on the top left hand side of your Page and in the Videos section. You could overlay your event hashtag as an outro and don’t forget to include your hashtag when posting and tweeting your videos.

Tip 4) Live stream – Regular readers will know that I’m a big fan of live video and produce the #SocialMediaShow every Monday at 9.30am on Facebook Live. In a similar way as the teaser video suggested above you should stress the benefits of attending but the difference with Periscope is that you can take questions from your viewers as well as provide them with information about the upcoming event. Already available in the US, a similar service called Facebook Live will soon be available in the UK to everyone who wishes to broadcast live.

Tip 5) Use Twitter Website Cards – Twitter Website Cards are Twitter’s second best kept secret (Advanced Search is the best). I call them ‘turbo tweets’ as they give tweets an extra blast of power by adding an inline image, headline, link and most important of all button – learn more here. The best bit is that all of that content only takes up the length of a link – 22 characters – so there is plenty of room to add a tweet to you card content as well. Although part of Twitter’s Ad platform, Website Cards are free to setup and use although they can be promoted if you wish as explained in Tip 7. See below for an example: 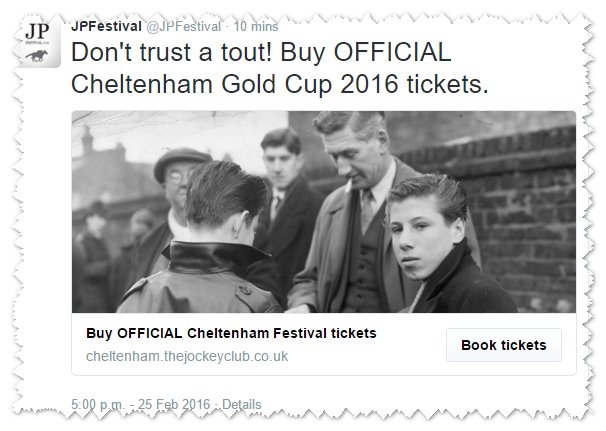 Tip 6) Reach out to your contacts – Social media is all about conversation so talk with your suppliers and ask them to share promotional content about your event. Speak to photographers, PA and AV engineers, caterers and so on making it easy for them by pointing them in the direction of tweets they can retweet and posts they can share. You should find them co-operative as it’s in their interests for your event to be successful. Twitter and LinkedIn are the best two channels for locating people and then striking up a conversation. You could also try suppliers relevant Pins using Pinterest’s messaging feature.

Tip 7) Invest in social ads – As social media matures it’s moving towards being paid media rather than earned and owned media. On Facebook, reach is now zero for many posts unless they are promoted (boosted). The strength of social ads is precision targeting of potential customers so if you have a good idea of the characteristics of a person attending your event ie your event ‘avatar’, then you’ll be able to reach them. Facebook has specific Ads for promoting Events (see Tip 2) so these are an ideal starting point. You could also use promote posts. On Twitter, you can promote the Website Card (see Tip 5) to a relevant audience. Twitter Ads are poor when it comes to targeting geographically but you can advertise to followers of relevant accounts, which is pretty handy.

Tip 8) Use Instagram – Instagram provides great value for the time invested as if done correctly you can receive the benefit of ‘3 social networks for the price of one’. Instead of taking a photo and uploading onto Facebook and Twitter, try using Instagram then share to the other two as well. You’ll find that Instagram photos don’t display automatically in Twitter but if you run them through this menu on IFTTT they will. Instagram is great for providing ‘behind the scenes’ footage such as photos of event planning and setting up the venue. You should aim to engage your followers and get them excited as the event nears.

As you can see from the above, social media can be used in a number of ways to promote an event but it can also be used for event planning, event management, event engagement on the day and to recycle event takeaways after it’s all over.

For help with creative ideas on all aspects of using social media at your event plus use of the latest social media techniques and features, please visit my Services page.