Here’s the replay of Monday 22 January’s The #SocialMediaShow which was broadcast live via my Facebook Profile from Cardiff. I cover the week’s social media news including WhatsApp’s launch of a business app plus plus Headline, Question Time, Tools Talk,Tip Of The Week, Number of the Week and Word of the Week.

The #SocialMediaShow is aimed at people who work on a daily basis with or who are interested in social media and the aim is to increase knowledge and improve use of social media. If that sounds like you and you want to keep up on the latest news throughout the week plus get access to insider tips, then join my newsletter subscribers or Facebook Messenger subscribers.

Headline: Just one in four Britons trust news on social media, finds survey published in The Guardian this morning.
Question Time:  Which social network puzzles you the most?
Tools Talk: MailChimp Subscribe
Tip Of The Week: Make your Facebook Cover photo more dynamic – change it to a video or slideshow.
Number of the Week: Just 31% of social media marketers broadcast Live Video in 2017 – State Of Social Report from Buffer and Social Media Week.
Word of the Week: Algorithm. In “The Master Algorithm”, Pedro Domingos offers a great definition: “An algorithm is, “a sequence of instructions telling a computer what to do.” In the world of social media it’s often used to describe the operations that power news feeds.

1) Facebook Users are being advised of changes to News Feed in …the News Feed. If you click the displayed note you’re taken to the Help to read the below: 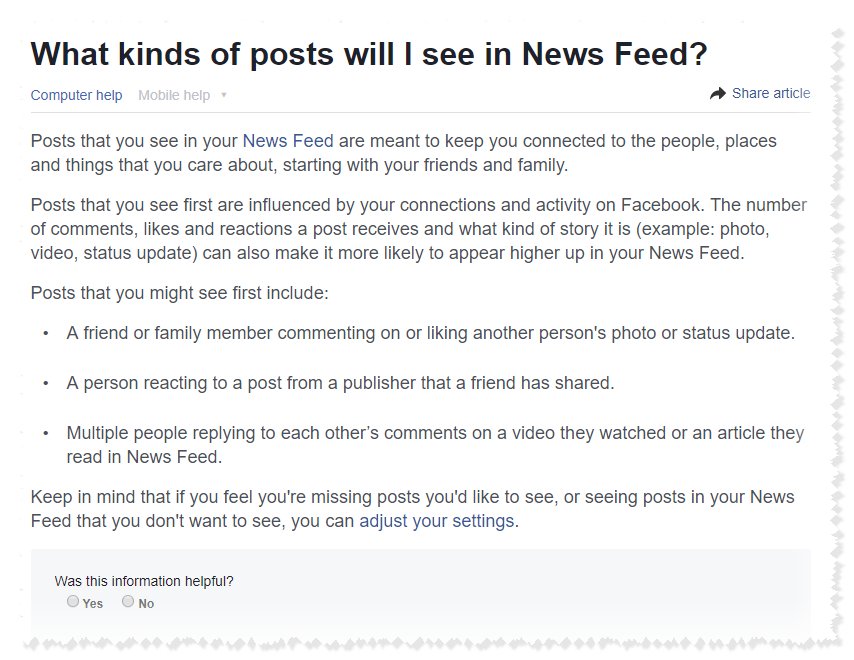 2) Facebook is testing new Watch Party feature which allows Facebook Group Admins to select any live or recorded public video on Facebook and share it with other members of the Group, who can then watch at the same time from the Group.
3) New Fake News ranking – In an attempt to combat fake news, Facebook is to start asking users which publishers to trust through surveys but they’re not going to publish the rankings.
4) Facebook is testing a new photo display in News Feed. Photos are displayed in a carousel format, are square whilst users can write Comments over them.
5) Facebook is testing publication of Stories from the desktop.
6) Collaborative Stories are coming soon for Events in which attendees and organiser can collaborate and produce the same Story.
7) Slideshow videos for covers are now available
8) New improvements to Facebook Group chat are on the way although there are no specifics.

FACEBOOK MESSENGER NEWS
9) David Marcus – Head of Messenger – announced on Tuesday that the main goal for 2018 would be to invest in removing clutter from the app and offer more streamlined features. In a post titled Six Trends for 2018: What to Watch from Messenger he also announced the introduction of new real-time communication services. No further details are available at this time.
10) An ioS bug appeared on the Facebook Messenger app last week. Users could only type a few words at a time on Thursday.

INSTAGRAM NEWS
11) Instagram has now enabled ‘show activity status’ (active or not) in Direct Messages so you can tell when others are using the app.
12) Instagram is testing new text-only Stories format called Type.
13) Notification when a user screenshots you Story are coming soon.

WHATSAPP NEWS
14) Business accounts have been launched on WhatsApp complete with profile pages, automatic greetings and stats. You can download WhatsApp Business from the Play Store on Android now.

TWITTER NEWS
15) Fake news – Twitter says it will notify nearly 700,000 users who interacted with accounts the company has identified as potential pieces of a propaganda effort by the Russian government during the 2016 US presidential election.
16) Rumour has it that Anthony Noto, Twitter’s Chief Operations Officer is leaving the company.
17) Twitter has been taking out ads in the ioS app store. Could it be the future of news following Facebook’s algorithm changes?

AND FINALLY:
A job advertising the Press officer role to William, Kate and Harry was the most-viewed job ad on LinkedIn in 2017 – read more.

The only upcoming social media course I haven’t mentioned above is Social Media Essentials with Jonathan Pollinger (Gloucester) – 6 February 2018. Join me for an overview of the latest social media trends and how to upskill your social media.