Here’s the replay of Monday 18 September’s The #SocialMediaShow which was broadcast live via my Facebook Profile from Cardiff. I’m also doing a 5 minute version of the show over on LinkedIn called #SocialMedia5 – you can watch here. This week we have 28 social media news stories with my insights in italics plus the usual features – Headline, Question Time, Top Tip, Tools Talk, Number of the Week plus a quirky story from the world of social media with And Finally.

The #SocialMediaShow is aimed at people who work with or who are interested in social media. If that’s you, and you want to keep up on the latest news throughout the week plus get access to insider tips, then check out Social Media Professionals or keep in touch by joining my newsletter subscribers or Facebook Page subscribers.

1. You can now use video as a Facebook Event cover. Great news for event organisers. Your Event will stand out even more now that you can use video.
2. Facebook is testing a ‘finding mentors and mentees feature’. Cheeky of Facebook copying this feature from LinkedIn before they’ve even rolled it out globally.
3. When uploading videos you can now pick any thumbnail rather than from a selection of 10. Will make it easier for me to find a thumbnail without my eyes closed.
4. Some users are seeing a new Snooze button on desktop to temporarily hide posts from Profiles and Pages. Handy for taking a break from friends that are irritating you.
5. Following last week’s news on a new feature allowing you to share to close friends, I was prompted to setup a private group. Not sure if this is the same feature?
6. Instant Videos are being tested on Android. Facebook videos are downloaded and cached to a phone while it’s connected to a strong WiFi signal so they can be watched later, on the go or offline. Instant videos are indicated with a lightning bolt icon. Can only encourage watching of videos on Facebook.
7. Facebook testing a new mobile app called Bonfire – it’s is a Group Video chat tool. A Facebook app without the word Facebook in it??
8. A ‘Movies section’ can now found in the main navigation menu of Facebook mobile apps in US. Users can click for show times and purchase tickets directly on Facebook. Looking forward to seeing this in the UK. Shopping on Facebook is coming…are you ready?

9. Facebook IQ has been revamped and now features an easy-access portal of all of its marketing and measurement data plus white papers and success stories on Facebook, Instagram, Messenger, and the Facebook Audience Network. Facebook also added a new Insights to Go tool which makes data more accessible and actionable, by letting you sort the stats that you care about and then downloading or sharing them instantly. Useful.
10. Power Editor and Ads Manager are going to be combined in the next couple of weeks. Great news. Nice to have all the functionality in one place.
11. You can now upload Instagram Stories as Instagram Ads. Good for big brands but not so sure about small business who aren’t using Stories much.
12. You can now use Instagram Stories as Facebook Canvas Ads. Potentially more useful for small business to highlight new products and sales.

15. Android users can now add selfies and colour background to direct messages and iOS users will be able too soon. FB just love coloured backgrounds at the moment.
16. There are new branding tools on Instagram. You can signify a paid partnership with a business with a ‘tag’ which is then approved by the business.
17. I spotted this week that Likes and Comments for Ads and organic posts are now added together, Previously organic engagements were reported on a stand-alone basis.
18 .Auto-play with sound on videos is now a thing on Instagram BUT only after you’ve switched on the sound on a previous video. Great news and good compromise for users/advertisers plus video publishers.
19. A favourite friends feature is being tested. Sounds like the similar Facebook feature that is currently being tested.
20. Instagram announced that users can now privately share Instagram stories in Direct messages.
21. Instagram is testing sharing of Stories to Facebook. Not sure if this will take on given the lack of popularity of Facebook Stories.
22. Instagram is testing 4 column grid for display of photos on users’ profiles. Many users are not happy as they’ve curated their pics for 3 columns.

LINKEDIN NEWS
23. LinkedIn is expanding pro-finder in US. It’s a database of freelancers on LinkedIn. A shame it’s not yet available in the UK.
24. There’s a new ‘Connections of’ filter in Advanced Search on desktop. Really handy for prospecting.

25. Twitter Adds Team Management Feature on Mobile. No need to swap password. Should be available now and setup via TweetDeck. Finally! But confusingly involving Tweet Deck is a strange way to implement this.
26. I spotted this week that Twitter is testing a new ‘Follow search feature’ where you can follow Trends. After you follow they appear in at the top of your News Feed. 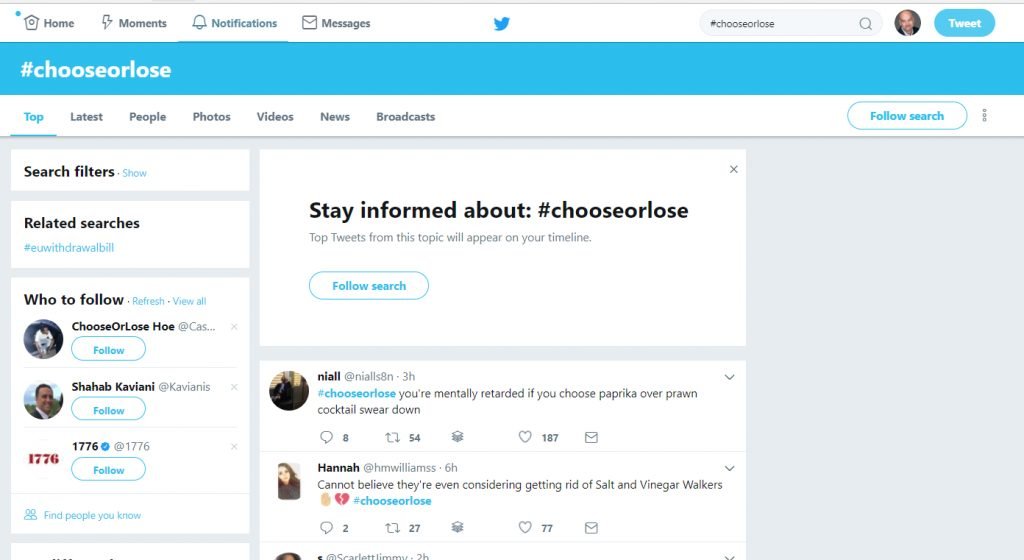 Top Tip: If you’re advertising on Facebook you need to install and use the Facebook Pixel. Ask me for help on this.
Tools Talk: ifttt.com
Number Of The Week: There are now 10m Pinterest users in the UK, according to ComScore, an increase of 30 per cent since September 2016.

For more information about how we can help with your social media efforts including other social media training options please call me, Jonathan, on 029 2078 9139. Alternatively you can email, tweet or message via Facebook. To receive a weekly reminder about The #SocialMediaShow, click the Send to Messenger button below: