As you can see just 140 characters is all that’s needed to provide an engaging promotion that helps spread awareness of the clothing brand. At the time of writing (10 Aug)  the @IllMindApparel account with 1803 followers has generated 32 retweets with the competition below. 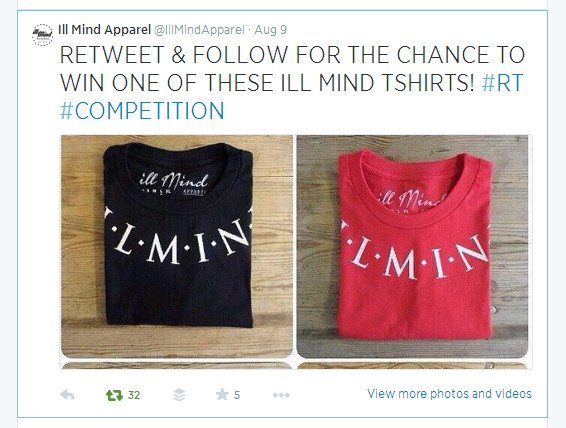 All that’s needed to run a Twitter competition like this is the instruction to ‘follow and retweet’ and a prize. What better way to describe the prize than include photos as with the T-shirts above. Whilst the photos show up fine via the permalink (tweet viewed on its own page), it would be better if they were sized correctly for viewing in the feed. For instructions on how to do this please read Avoid this common Twitter mistake.

I’m not sure why #RT is hashtagged as this serves no value but a great idea to hashtag #COMPETITION to raise awareness on Twitter to those seeking out contests and draws. The 140 character limit makes it difficult but a hashtag unique to the competition could be included and used to raise awareness on other channels eg email, website and print. It would also make it easier to track those that have entered and to pick a winner.

It’s unusual for tweets to be in capitals but for this competition I think it’s a good way to highlight the promotion  by making it stand out.

If you need advice on setting up a competition on Facebook or Twitter please let me know.