Twitter has enhanced promoted accounts  and tweets by adding the ability to target by location or device. This move strengthens what is already a great product for small businesses. 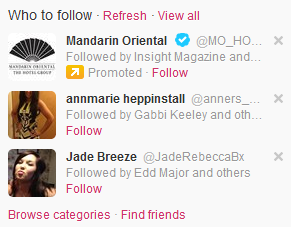 Promoted tweets are placed in the timelines of non-followers thus enabling you to reach a wider audience than normal. Your tweets are first sent organically to your current followers, and promoting tweets amplifies the best ones to a new broader audience. As well as highlighting your key messages this can help you attract new followers too.

Twitter has now added the ability to target your promoted tweets and account by geographical region thus allowing your tweets to be more relevant to your audience. For example, the tweet above is posted only in timelines of UK tweeters. At present it’s not possible to target UK cities although this will not doubt be available shortly as you can promote to US cities.

You can also target by device although it appears that this feature is not yet available to UK users. This could be useful if you were promoting an iPad app and wanted to focus on iPad users.