Twitter roll out updated app for iOS 8 – Twitter have updated their app for iPhones and iPads to take advantage of one of Apple’s new operating system’s features; interactive notifications. For example, users can reply to a Tweet from the notifications area without opening the Twitter app.  The updated app also features a new design for profiles and you can now access a saved draft while posting a Tweet.

Ads are coming to Instagram  – If you’re a UK Instagram user you might have noticed the Sponsored Post below appearing in your feed. Instagram, now owned by Facebook, needs to generate money so Ads will be introduced in the UK with selected partners in the coming weeks. “Our aim is to make any advertisements people feel as natural to Instagram as the photos and videos they enjoy from brands who are already using Instagram,” said spokesman Will Guyatt. The post has received 119,000 Likes but most of the comments from users have been negative. 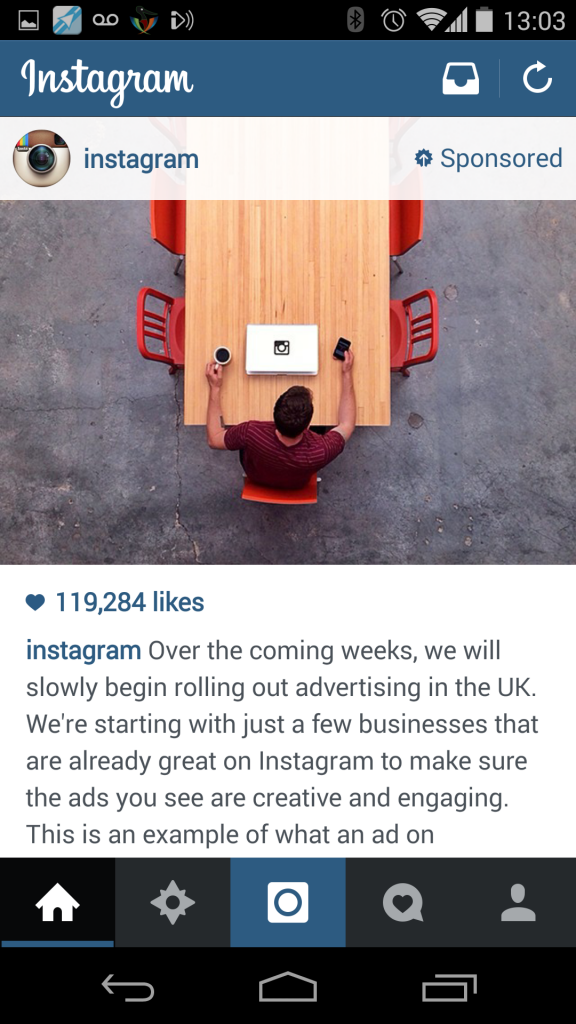 Pinterest launch ‘News notifications’ – Pinterest have rolled out a new section of Pinterest notifications called News. This new tab gives you a snapshot of what’s new with all the different Pinners, brands and boards you follow, as well as updates from your Facebook friends, even if you don’t follow them. This is good news for businesses as  when your business adds a Pin, creates a new board, likes or follows a user or a board, people who follow you will see these updates. They’ll then be able to click through to see or engage with that content further. If they repin, follow or like something of yours, their actions will be flagged in the News notifications section for their followers and Facebook friends on Pinterest.