Here’s the replay of Monday 5 March’s The #SocialMediaShow which was broadcast live via my Facebook Profile from Cardiff. I cover the week’s social media news including Facebook’s launch of job postings plus Headline, Question Time, Tools Talk, Tip Of The Week, Number of the Week and Word of the Week.

The #SocialMediaShow is aimed at people who work on a daily basis with or who are interested in social media. It’s purpose is to increase your knowledge and improve your use of social media. If you’d like to keep up on the latest news throughout the week plus get access to insider tips, then join my newsletter subscribers or Facebook Messenger subscribers.

Headline: The headline that caught my eye this week was: “Could you make a living – or fortune – from social media?” in The Irish Independent
Question time: Do you boost your Facebook posts? Let me know in the Comments below.
Tip Of The Week: Correct typos on your LinkedIn profile. When I ran a search 16,265 people spelt “enginerring” in this way and 11,235 wrote “marketting”.
Tools Talk: Try hashtagger app which is great for Instagram hashtags. It’s the one with the pink icon on Android and Apple.
Word of the Week: Bookmarking – works just like a physical bookmark. Save your content and access it later.
Number Of The Week: 330 million. In 2017, 330 million people started conversations with small businesses via Facebook Messenger.

FACEBOOK NEWS
1. Examples from Facebook’s billboard campaign mentioned on a previous #SocialMediaShow were spotted by me in Cheltenham, Cardiff and Birmingham this week. The photo below was taken outside Cheltenham Spa Railway Station. 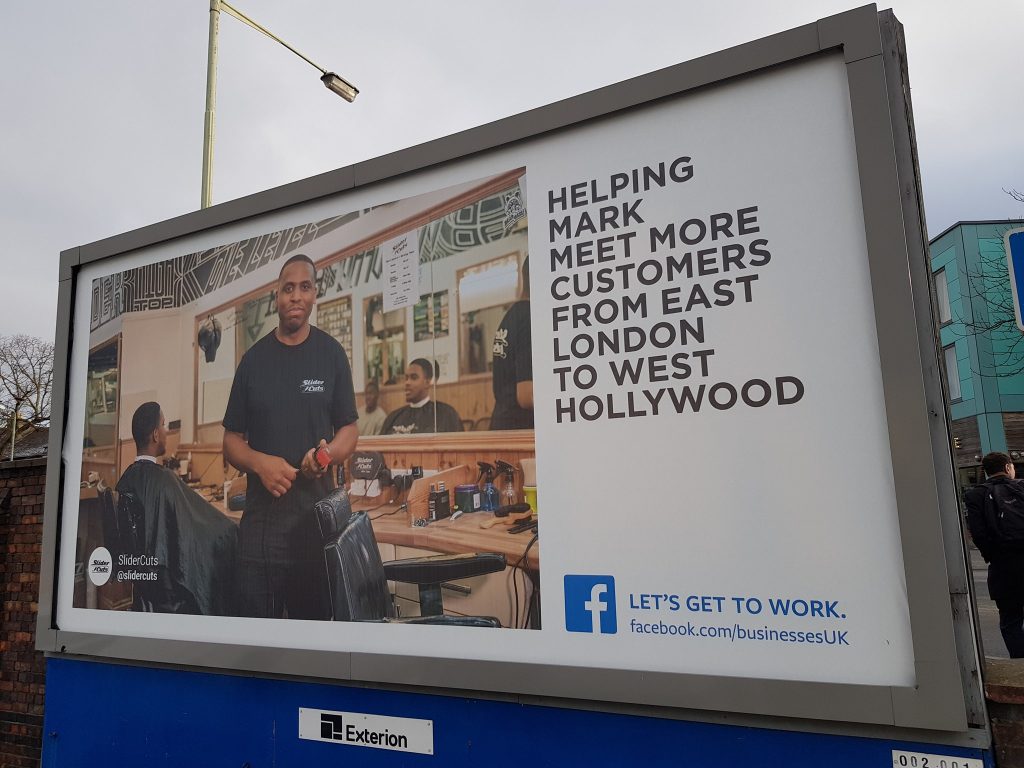 2. FB Stories of friends are being promoted in FB messages
3. Facebook job postings is being rolled out in 40 countries complete with new Jobs section on Pages, Jobs dashboard, Jobs on Facebook Marketplace and on the News Feed. Job seekers can find vacancies, auto-fill applications with their Facebook profile info and submit their application and communicate via Messenger to schedule interviews.
4. Facebook have ditched the Explore feed test but in the UK the Explore feed remains for “Top posts for UK from across Facebook”.
5. Facebook is testing Voice Clips as a status update option with a small percentage of users in India. Thanks to Matt Navarra of The Next Web for this one.

FACEBOOK MESSENGER NEWS
6. A Messenger Broadcast tool is being tested which lets Page Admins send a broadcast message to people who’ve already messaged their Page. I wonder how consumers are going to react to this?

INSTAGRAM NEWS
7. Rumour has it that Facebook are considering adding voice and video calling to Instagram following the discovery of references to these features in the code.

WHATSAPP NEWS
8. You now have an hour to delete a message from everyone in a Group chat. Was 7 minutes.

LINKEDIN NEWS
9. You can now better manage LinkedIn invites that you receive – by school, company and mutual connections.

My next LinkedIn workshop with Louise Jenner is on 17 April in Gloucester – How to grow your business with LinkedIn.

SO excited to announce that we’re bringing Bookmarks to all of you today! It’s something that a lot of you have asked for and we’re excited to introduce this change to our platform as a way for you to keep up with what matters to you most. https://t.co/MHHp7A2NfJ

11. Twitter has asked for help in devising a “health check” to measure its contribution to public conversation. It said it hoped to work with “outside experts” and is inviting proposals. I may send in some ideas.

A couple of other workshops to flag up for you! Social Media Essentials on 10 April and Advanced Social Media on 1 May, both in Gloucester.

PLEASE SHARE THE #SOCIALMEDIASHOW IF YOU THINK YOUR FRIENDS AND CONNECTIONS WILL FIND IT USEFUL. THANK YOU.