A new style of Social Media campaign for raising a brand’s awareness has emerged; the Twitter Party. It’s a variation on a standard Twitter competition with entrants tweeting an answer to a question along with a hashtag for a chance to win a prize. With a Twitter Party, the competition takes place over a 1 hour time slot and there are a number of questions to answer.

For our final competition question tell us, if you could take a celebrity on holiday with you, who would it be?#flythomascookCapeVerde

The advantage of the 1 hour format is that it creates a focus and provides a sense of urgency, which encourages people to take part. Brands can build up to the hour using tweets and Social Media updates to provide details and encourage people to enter.

Who will be joining us today for our #BONBON Twitter Party? RT if you are! pic.twitter.com/uOwThL5bp8

Fancy winning 2 return trips to Cape Verde? Join us today at 1pm for our #flythomascookCapeVerde twitter party with @ThomasCookUK!

Both competition’s hashtags have trended (in UK’s top 10 most tweeted terms) which is a great result for the brands concerned, as it puts them in front of the UK’s 15 million Twitter users and thanks for to participation from their audience, for free. 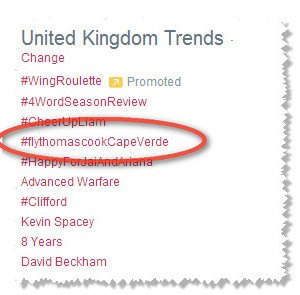 In contrast, brands that take the Promoted Trend option and pay for the number 1 trending spot are paying £127,000 for their hashtag or term to appear for 24 hours.

You can find out more about what makes content go viral in How to go viral.