You can watch my take on latest news on THE #SocialToday SHOW below and LIVE every Monday at 8.45am BST on Facebook Live. Feel free to ask me questions by posting under this blog post, or by tweeting me @intranetfuture.

Facebook – I noticed my Intranet Future Facebook Page had had a makeover at Facebook.com this week and it turns out Facebook has been testing a new Page design with a some users. There is no official word from Facebook on whether the new design will be rolled out to all. The Page is back to the old style now but I did take a screen shot. As you can see it’s a cleaner look with the call to action button given more prominence than before. Another change is the move of the horizontal menu under the cover photo to a vertical menu on the left. What do you think of these new design? Let me know in the Comments below. 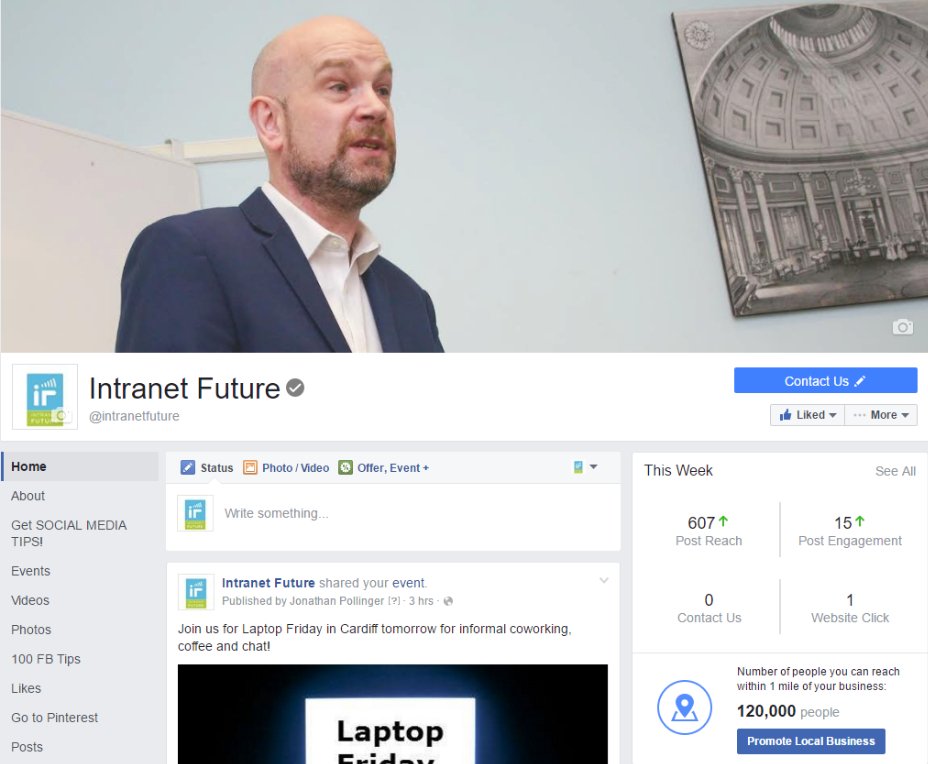 Facebook will soon be launching a new dedicated area to help advertisers create and preview Ads. The Facebook Creative Hub offers advertisers on Facebook and Instagram “a new way to mock-up ads, get inspired and share creative concepts.” Each Ad will have a URL so that it can be shared and feedback obtained before going live. Those interested can go to the Hub area now to join the waiting list.

Facebook Live – In his first Facebook Live Q and A last week Mark Zuckerberg stated several new exciting features are on the way to Live. ‘Drop-in functionality’ is coming whereby viewers could join the broadcast, in a similar way to how Blab works (Note at 25.5.18 – Blab is no more). This would make it possible to do live interviews. panel shows including live Q and As. – great news! A new waiting room feature is on the way where viewers will be able to assemble ahead of a scheduled show so that broadcasters can start with a more established audience. This resolves the problem of viewers missing the first few minutes of a show or waiting around with nothing happening waiting for the show to start.

Here’s the full fascinating interview covering Facebook and entrepreneurship which lasts an hour:

[RUMOUR] – It’s been reported that Facebook has signed contracts with more than 140 high-profile creators and publishers to have them broadcast exclusive content on Facebook Live, suggesting that Facebook see Live as a real competitor to traditional broadcast TV.

Facebook Messenger – American Express has unveiled plans to introduce an Amex bot to Facebook Messenger that would let customers receive real-time purchase alerts and key information about benefits related to their purchases. For example, if you buy a plane ticket to New York you would receive an alert direct to Messenger confirming purchase, along with details of complimentary access to an airport lounge, hotel and restaurant recommendations. Amex’s new assistant will ask yes/no questions with answer buttons for the user to click.

Instagram has announced that it now has an incredible 500 million monthly active users, around 200 million more than Twitter, with 300 million users using the app every day.

Twitter – Twitter has introduced the ability to upload videos of up to 140 seconds (surprise, surprise!) which is an increase from the previous 60 seconds limit.  The new video length is supported on iOS, Android at at Twitter.com. Twitter also announced that it plans to introduce a new full screen viewing experience for videos.

Now live: new ways to tap into @video on Twitter so you can shoot, watch, and create more! https://t.co/mdnG7Jly1n https://t.co/8XSZxELKCt

LinkedIn – If you missed it last week’s here’s my open letter to Microsoft outlining a few things they should fix on LinkedIn.

Pinterest – Pinterest Ads have only been live in the UK for less than two months but they’ve now added three new targeting options; customer list retargeting (eg email lists), website visitor retargeting (people who’ve visited your website), and lookalike targeting. This is in addition to targeting Promoted Pins based on Pinners’ interests, search keywords, device and location. For those advertising on Pinterest, this should help provide even better results. Recommended for those selling products or a visual nature, eg jewellery and fashion.

Number of the week: 500. The number of monthly Instagram users.