You can keep up to date with the latest social media news and developments by watching THE #SocialToday SHOW every Monday on Facebook Live – just Follow me. The social media landscape is fast shifting with changes happening every day and it can feel like a full time job to keep abreast of the latest trends and new features. So watch, ask and learn about the latest new features with tips on how you and your business can benefit.

You can watch THE #SocialToday SHOW video with my take on this week’s social media news or continue reading…or do both!

My take on the latest #socialmedia news on THE #SocialToday SHOW. Comments welcome! Watch – Ask – Learn

Facebook – Facebook have rolled out photo frames enabling users to show their support for a country, cause, vents or movie by placing a frame around their profile photo. You can add a frame here – add profile photo frame.

Twitter – Twitter have made the move many long time users including myself have feared, with personalised timelines now the default. So if your timeline has been looking a bit odd over the past week, that’s probably the explanation. However, you can revert to the original reverse chronological (ie latest tweets first) approach by going to Settings and unchecking ‘Timeline: Show me the best tweets first’. 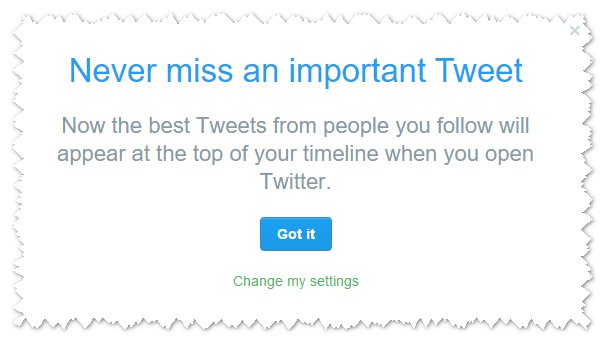 There’s now a Windows 10 app for Twitter and you can get it here – download now. A nice touch this week with the introduction of seemless login for TweetDeck. If you’re logged into a Twitter.com or are using a Twitter login on a website, you won’t need to login to TweetDeck seperately.

Talking of TweetDeck, from 15 April TweetDeck for Windows will be no more but the web interface – you can access at https://tweetdeck.twitter.com/ – offers a better experience so this news shouldn’t be a blow for anyone. I do wonder when Twitter will add a new feature or improve TweetDeck as it’s basically been the same since it acquired it in 2011.

Instagram – Using algorithms to determine the feed was flavour of the month with Instagram as well as Twitter adopting this approach. The new style timeline will be “based on the likelihood you’ll be interested in the content, your relationship with the person posting, and the timeliness of the post.” However, unlike Twitter it’s not possible to revert to the reverse chronological approach.

LinkedIn – LinkedIn share price has been struggling lately and fell to 50% of its 2016 last Wednesday after analysts at Morgan Stanley warned that the professional networking site “isn’t likely to be as big of a platform as we previously thought”.

Pinterest [RUMOUR] – It’s rumoured that Pinterest are testing video ads with a select band of US users. Although Pinterest launched ads in May 2015 in the US, surprisingly they have yet to be launched in the UK but surely it won’t be much longer?

WhatsApp – WhatsApp has made it possible for for users to share documents as part of a new update for iOS and Android apps. On Android, users who tap the paper-clip icon for attachments will see a Document button, while on iOS users who tap the upload icon will see the option to Share Document. Handy for quickly and easily sharing documents.

THE #SocialToday SHOW on Facebook Live video will return on Tuesday with a top social media tip so Follow me on Facebook and do tune in then.