A Twitter storm broke out yesterday over the apparent sacking of 28 year old Chef Jim Knight @chefjimknight by the Plough Pub @ploughpub in Great Haseley, Oxfordshire. Thank you to Julian Wellings @expertiseontap for alerting me.

It appears the pub didn’t regain control of their Twitter account so following the alleged sacking the following was tweeted by the @ploughpub: 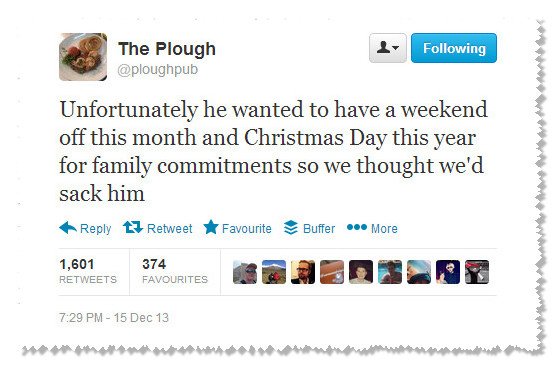 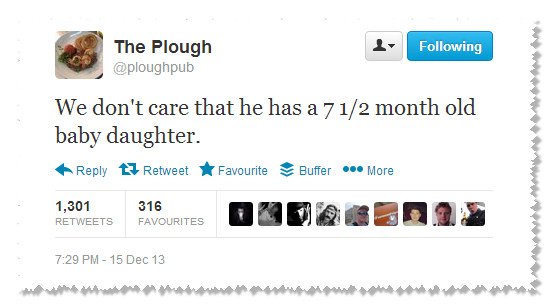 At the time of writing, 11.30am Monday 16 December, the tweets are currently live and there has been no response on Twitter from the pub whose reputation has received a kicking. It seems that they haven’t yet regained control of their account although they have picked up around 3000 followers since Sunday night. Here’s a couple of the more polite tweets the pub has received in response to the tweets above:

There could be more to this story than meets the eye and as a number of journalists have been in touch with Jim Knight, there’s no doubt that they’ll be plenty more on the story to read soon. Not all the tweets have been in support of the former Head Chef:

@fantasticpru @hols1983 Also, by attempting to ruin their business out of spite he’s potentially affecting the livelihood of ex-colleagues. — Trippy Pip (@TrippyPip) December 16, 2013

Putting the rights and wrongs aside there  is a key lesson businesses and organisation can learn from this case: ensure that you retain control of your Twitter (and other social network accounts) by changing your password before redundancy consultation. You can reduce risk further by using a social media management tool. Set up a tool like TweetDeck or Buffer for employee/s that are managing your social media and they don’t have to know your Twitter password. Whilst they can still tweet at least they can’t change the password and deny you access. Here’s how to change your password:

It’s good practice to change your password on a regular basis. As I’ve been writing this, it appears that Jim Knight has been offered a job but there’s still no response from the Plough Pub.

I have very kindly been offered a serious job offer directly off the back of this twitter storm. More info to follow x

What do you think of this story? Please let me know in the Comments below.

Update at 8.30am Tuesday 17 Dec 2013: All the tweets from the @ploughpub account have now been deleted.