Welcome to my latest social media news snippets. To help you keep up to date with the latest changes in social media and improvements to social network functionality, here are some developments and news items that caught my attention.

Facebook introduce Call To Action button – You can now encourage visitors to your Page to take an action, such as ‘Sign up’ to a newsletter or ‘Buy now’. If you’ve not yet set this up, I’d strongly advise you to do so. Tip: If the button is not visible on your Page, then make sure you are acting as yourself ie using your profile, and not as the Page.

Feature a Facebook video and create a playlist – You can now feature an uploaded video under the About section on the left of your Page – (see below) and create video playlists. The latter is a handy feature if you have a number of videos and you wish to categorise them. 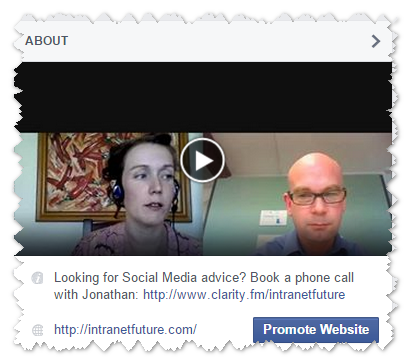 Twitter improves DMs – Direct Messaging, Twitter’s method of privately messaging other users, has been improved in a couple of ways. Firstly, you can now message people, even if they are not following you. Everyone on Twitter now has the option of being able to accept messages from any user, this making communications easier. Secondly, you can now message more than one person using Group Messaging; handy for collaboration.

LinkedIn has a revamp – The professional’s network’s homepage has had a long overdue makeover and there are no three clear buttons for Sharing an update, Uploading a photo or Publishing a post. Above the buttons you’ll find stats about your profile.

Periscope – Twitter have launched a new app called Periscope – view on iTunes – which enables you to broadcast live via your iPhone or iPad. It’s a shame it’s not on Android yet but it’s coming soon. It has huge potential for broadcasting events, tips, talks, conferences, behind the scenes activities, instructions and all manner of business activities. As well as your live video being broadcast over Periscope, a link to your video is automatically posted to Twitter to attract additional viewers. Expect to hear a lot more about Periscope in the coming months.

BufferApp – Pinterest now joins Facebook. LinkedIn, Twitter and Google+ as social networks that can be connected to Buffer. This has been Buffer’s most requested new feature and it’s addition makes the social media dashboard even more useful. You can read more about Buffer in two of my posts over on LinkedIn – here and here.