Alternatively, watch the recording of THE #SocialToday SHOW below:

The social media landscape is fast shifting with changes happening every day and it can feel like a full time job to keep abreast of the latest trends and new features. So join me on THE #SocialToday SHOW every week to watch, ask and learn about the latest new features and how small business owners plus PR and marketing people can benefit –  just Follow me on Facebook.

Facebook – There are a whole host of great new features for Facebook Live. You’ll can now go Live in Facebook Groups and Events. In a Group you could broadcast about your shared interest and in an Event you could provide coverage of the Event to those that RSVP-ed but weren’t able to attend. I’ll be using Facebook Live in Events for THE #SocialToday SHOW and look forward to trying out Facebook Live in Groups for Laptop Friday.

The second new feature is the introduction of Live Reactions. During a Live broadcast viewers can express their feelings using animated Love, Haha, Wow, Sad or Angry icons – the same reactions recently introduced into the News Feed.

The third new feature is recording and playback of Comments. People watching the replay will no longer miss Comments made during the Live broadcast.

The fourth new feature is Live Filters where one of fifth filters can be overlaid onto the video. Snapchat have a similar feature.

The fifth new feature allows viewers to invite their friends to join them whilst watching a Live video.

Sixthly (I did say there were a whole host of new features!) there’s a new dedicated place on mobile apps for Facebook Live where you can discover and search for videos. I don’t appear to have this yet on iPad in the UK but looking forward to using it soon. For broadcasters, it should mean lots more viewers. Popular Facebook Live videos will also be marked LIVE under Trending.

And finally, there a new Live Map on desktop where you can see who’s broadcasting across the world.

[RUMOUR] – Facebook have published 2 studies on their research blog – Do jobs run in families? and How strong and weak ties help you find a job. This is interesting given that Facebook are not currently in the recruitment business. Could it be that they are looking at taking on LinkedIn in this sector?

Facebook Messenger – Facebook have announced three new improvements to Messenger. Page user names will shortly be displayed beneath the Page name and customers will be able to find your business and contact you more easily using your user name. If your Page doesn’t yet have a user name, then now’s a good time to set one up. Secondly, customers can now contact you via Messenger link (m.me/username) or Messenger code (available from your Page’s inbox). Here’s my link m.me/intranetfuture my code is below. You can click the link or scan the code to start a conversation. 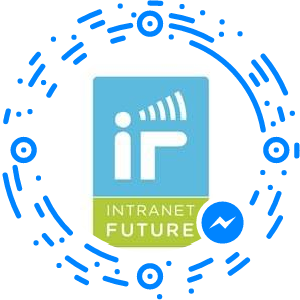 The third improvement named Messenger Greetings are customizable notes that appear in a new message thread before messages are sent by your business.

Twitter – Twitter have now made it easier to send a tweet via Direct Message with the addition of a Message button on all tweets. It should help to spark new conversations and develop existing ones.

Instagram – Instagram have doubled the length of time of videos you can upload from 30 seconds to 60 seconds.

Pinterest – It’s been a long time coming but having been launched in early 2014, Promoted Pins (Pinterest Ads) are being made available outside the US with the UK first in line. There’s no confirmed date yet but I would imagine it will be weeks rather than months before you’ll be able to promote your Pins.

THE #SocialToday SHOW on Facebook Live will be broadcast at 8.45am on Tuesday. Follow me on Facebook and RSVP to the Event to ensure you don’t miss out!