Here’s the replay of Monday 9 April’s #SocialMediaShow which was broadcast live via my Facebook Profile from Cardiff, Wales. I cover the week’s social media news and provide insights plus there are the regular features – Headline, Question Time, Tools Talk, Tip Of The Week, Number of the Week and Word of the Week. The main news stories this week highlight Facebook’s reaction to the Cambridge Analytica data storm.

The #SocialMediaShow is aimed at people who use social media for business. The show’s purpose is to increase your knowledge and improve your use of social media. If you’d like to keep up on the latest news throughout the week plus get access to insider tips, then join my newsletter subscribers or Facebook Messenger subscribers.

Headline: Twitter postpones platform change that would cut off third-party apps – The Verge
Question time: How often do you use LinkedIn?
Tip Of The Week: Check out Instagram Stories – a great format to let your fans get to know you.
Tools Talk: Tap Bio
Word of the Week: Clickbait – According to Hubspot, Clickbait is a term to describe marketing or advertising material that employs a sensationalized headline to attract clicks. Clickbait relies heavily on the “curiosity gap” by creating just enough interest to provoke engagement.
Number Of The Week: Mark Zuckerberg – 15,000 people working on security and content review, rising to 20,000 by end of year.

1. Bulk deletion of connected apps – you can now remove more than one connected app at a time.
2. There’s a new Ads info tab coming so you can easily see who has your data.
3. Facebook suspend bots and apps – No new bots or apps are currently being allowed so don’t disconnect any bots you’re using.
4. Facebook is postponing smart speaker launch until data controversy dies down.
5. Facebook clamping down on info obtained via FB login eg accessing a user’s political views, religious affiliations and relationship status.
6. It’s no longer possible to search for people via email or phone number.
7. New permanent deletion tools are coming soon – you’ll be able to permanently delete anything from timeline or profile.
8. New ‘Privacy shortcuts’ menu is available on mobile apps.
9. Facebook to notify the 87 million people affected by Cambridge Analytica data breach on News Feed today.
10. Testing – Composer box on mobile will show open camera window and most recent images – demonstrates focus on photos.
11. Testing – default when taking photos with FB camera will publish to Stories.
12. Testing – more prominent preview tiles for FB Stories are coming.
13. Monthly subscriptions to creators being tested in UK and US – users pay to view Facebook Live programming.
14. Comment privacy being rolled out – A new Lock icon allows users to toggle two privacy settings for comments on public posts: open to the public or only visible to you and the profile or page owner.
15. Local news prioritisation that was tested in US is now available in all locations.
16. Local news feed has been expanded to more US cities.
17. Small test with local responder Pages to use as part of an alert systems in emergency.
18. Facebook is rolling out Video Cover Image Options for Profiles.
19. More context on stories in News Feed to everyone in the US after test – eg other content from publisher.
20. Testing – Cover displaying Live during Live video on Pages.
21. Owners of large pages and political advertisers will need to be verified but unclear what large or verification means.

22. Facebook has put new bots on hold.
23. 360 degree photos can now be displayed on Messenger on mobile apps
24. High definition video can be sent via Messenger too.
25. Unsend feature coming in the Summer – previously used by Mark Zuckerberg and others at Facebook HQ but now withdrawn until wider launch.

26. #fentanyl, #oxycontin, #opioids and other drug related hashtags have been banned and removed from Instagram.

To learn more about Instagram and other social networks come along to my Social Media Essentials Workshop on 10 April in Gloucester.

28. New LinkedIn profile design coming soon to desktop. When someone who has the update views your page they see the new version but when you view their page you see the old version – thanks to Greg Cooper for the heads up. 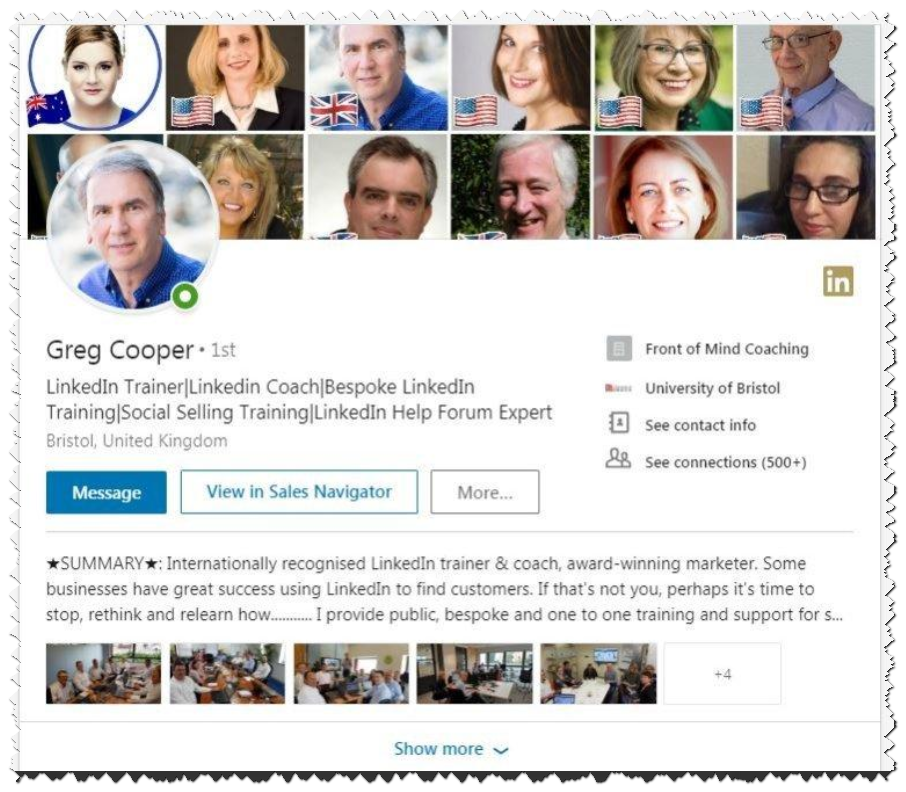 29. New Skill rating on profiles has been launched on mobile apps – you receive a prompt after giving an Endorsement.
30. Support for gifs is being added to Messaging on LinkedIn.
31. Publication of native video now available on LinkedIn Company pages.
32. Testing – LinkedIn are testing using hashtags in posts which has caused some issues with users being forced to add hashtags. Remember when LinkedIn withdrew hashtags?

Louise Jenner will be holding the How to grow your business with LinkedIn on 17 April in Gloucester.

33. You can now tweet a live video or replay that starts from a ‘timestamp’ on Twitter Live and Periscope

37. Video ads now available on LinkedIn Company Pages.
38. Facebook custom audiences will soon require user consent confirmation –  Users will have to state: “I certify that I have permission to use this data.”
39. No more third party data is to be used in Facebook advertising. It’s to be phased out over next 6 months.
40. Facebook has made it easier to do split testing by including it with the Easy Creation tool.

Please note that it’s your last chance to attend my public/open workshops as the currently scheduled ones (view upcoming social media workshops) will be my last. I’m giving them up to focus more on in-house training where I can provide tailor made content in training style appropriate to you.